Riders to watch at this year’s Aachen Rolex Grand Prix 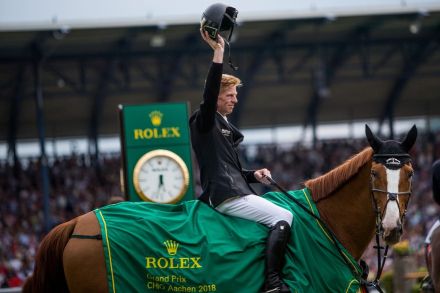 From 12-21 July 2019, visitors from all over the world will once again travel to Germany to witness one of the most prestigious equestrian events of the year, CHIO Aachen. The nine-day event will play host to the second Major of the year, the Rolex Grand Prix, in which the world’s top equestrian athletes will go head-to-head, as they each contend for the highly sought-after victory.

The world’s greatest horse-and-rider combinations will be vying for one of show jumping’s most prestigious titles, the Rolex Grand Prix. With many of the world’s top 20-ranked riders set to compete, the field looks wide open; however, following strong recent performances on the outdoor circuit, there are notable partnerships that could claim the Rolex Major win:

Daniel Bluman made history at CSIO Roma Piazza di Siena, becoming Israel’s first ever rider to claim victory at this prestigious event, after winning the Rolex Grand Prix. The complicated course saw only four of the 44 combinations go clear in the first round, with Bluman and his 11-year-old gelding, Ladriano Z proving unbeatable after going clear in the jump-off. The 29-year-old rider has his sights set on his next victory and will pull out all the stops to secure his first Rolex Major title.

Rolex Testimonee and show jumping hero, Eric Lamaze has displayed remarkable determination this season. Lamaze won the PwC Cup at last month’s ‘National’ CSI5* presented by Rolex at Spruce Meadows, in which he and his mare, Fine Lady 5 won an electrifying jump-off. Just two days prior, Lamaze won the RBC Grand Prix of Canada presented by Rolex with his 13-year-old gelding, Chacco Kid. After his recent successes the unstoppable 51-year-old rider will do everything in his power to lift the coveted trophy at CHIO Aachen.

Legendary Swiss rider and Rolex Testimonee, Steve Guerdat has also been on fine form this season having tasted recent success in Calgary, Canada. Aboard his young mare, Albfuehren's Bianca, the Swiss rider finished runner-up to Lamaze in the RBC Grand Prix of Canada presented by Rolex. The current world number one-ranked rider and his 16-year-old gelding, Venard de Ceris then went on to win the ‘Pan American’ Grand Prix. Guerdat, who was second in the Rolex Grand Prix at The Dutch Masters 2019, will be hoping to go one further in Aachen to claim his first Rolex Major of the calendar year.

Following an impressive win with Balou du Reventon in the Rolex Grand Prix at Knokke Hippique in Belgium, Ireland’s Darragh Kenny is another rider to watch. It wasn’t an easy win for the Irishman, as the complicated course, designed by Uliano Vezzani, saw only six of the 47 combinations qualify for the jump-off in the 1.60 metre competition. Kenny and his 13-year-old stallion proved unbeatable and, having tasted recent victory, he will travel to CHIO Aachen with high hopes of continuing his success.